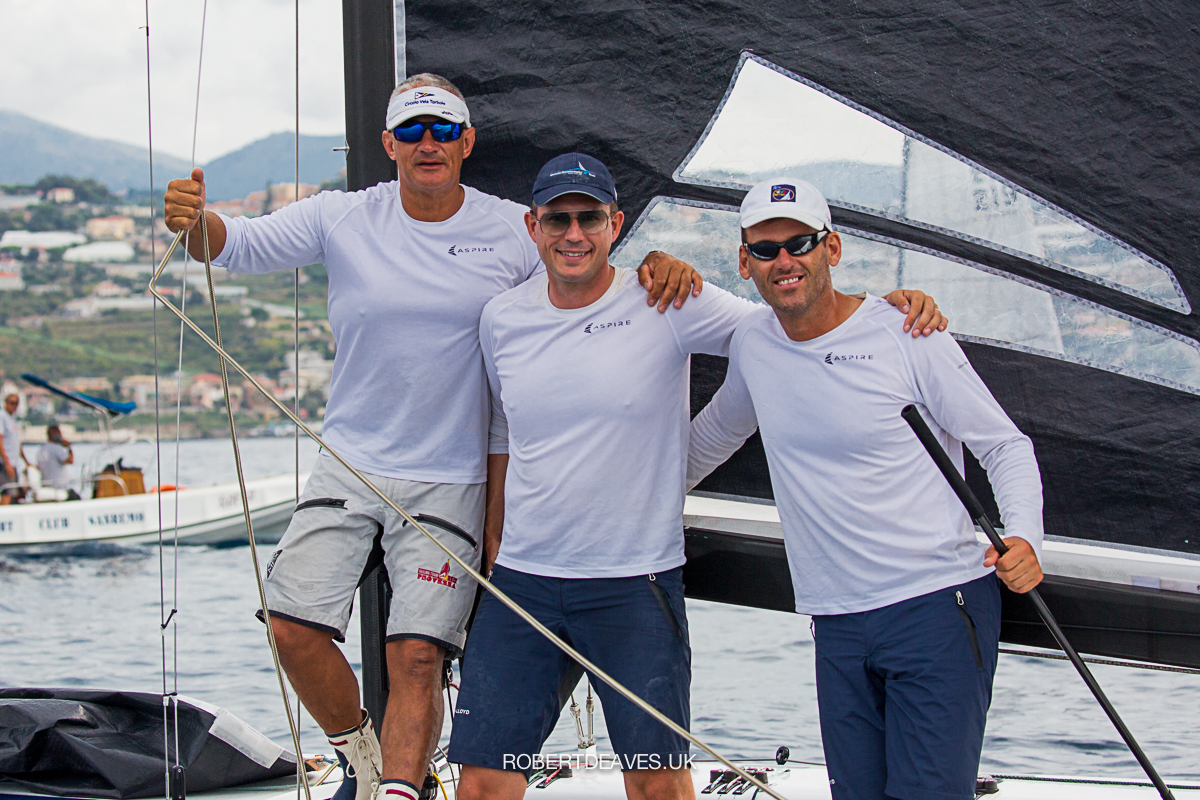 The fleet was sent out early in what was predicted to be the only window of opportunity all day, but the light wind soon died to leave a glassy sea and the boats were towed back to the marina to wait it out. It didn’t look promising and at 12.30, AP over A was hoisted to end the championship.

Mateusz Kusznierewicz, skipper of the winning boat summarised the week.

“Sanremo is a beautiful place to sail and we really enjoyed being here in the club and with the fleet of 5.5s. I must say that for the first regatta for us, we enjoyed it a lot, not just because of the winning, but also the atmosphere between the teams with some great sailors and also good mates.”

“It was a tough week because we had very light winds, with maybe two races in a good breeze but we had to be patient, wait, but it was all good. It is a pity we didn’t get to race on the last day today because we were ready to have good sailing, because we need that on our boat, but also the competition. This is why we are athletes, this is why we are sailing.”

“But altogether we are very happy to be here and enjoy it in this special year, a very hard year for sailing, and it was great to have this European championship, one of the first regattas for the 5.5s. It’s been a good week.”

Apart from one day it has been a week of very hot, light wind racing. The new teams here have met the challenge of 5.5 Metre racing with huge enthusiasm, but have not had it all their own way. The learning curve is steep for such a technical boat, but that’s part of the attraction.

Christoph Burger, middleman on New Moon II described the feeling of sailing a 5.5 Metre. “The 5.5 Metre class is a great boat to sail because it can be trimmed very neutral for the helm, almost too neutral sometimes, which means that just the feeling helming these boats is so superb you can adjust pretty much everyone on the rig and sails to achieve that feeling for the helm and I guess that’s one of the reasons why a lot of the 5.5 sailors love their boat, because it’s just a fantastic feeling to helm it.”

The top two boats are newcomers to the fleet, but know the challenge will get harder when the whole fleet is back together. Kusznierewicz added, “This week was all about training for us so we are delighted to win. Our expectations were somewhere in the top five. But we still have a lot of learning to do.”

While the top nine boats were Moderns, the top Evolution boat, in the fleet of six here, was Ali Baba (GER 84, Wolf Eberhard Richter, Beata Kallkowski, Hans Wendlandt), who spent most of the week inside the top 10 and ahead of several other moderns.

The leading Classic boat was Kukururu (ITA 6, Giuseppe Matildi, Gianluca Marolli, Alessandro Marolli), also the oldest boat in the fleet. She was designed by the Swede, Arvid Laurin, and built by Cantieri navali Baglietto in Italy in 1953. A special mention must also go to Korrigan (FRA 19), built in 1961. Jaouen Gurvan spent half the week racing singlehanded as he arrived without a crew.

Despite the COVID-19 restrictions the Yacht Club Sanremo has put on a fabulous event, with great racing despite the, sometimes, tricky conditions and great hospitality ashore with after race refreshments in an open and spacious but sheltered setting.

While many classes have been unable to hold any championships this year, the 5.5 Metre sailors are feeling quite fortunate that they have managed to hold both a World and European championship in 2020, probably one of the very few classes that have managed to do this. While there are many boats missing from Sanremo, there was huge enthusiasm to come here and make it work. And it did.

The influx of new sailors and new boats is also very positive news for the class. With sailors such as Kusznierewicz and Schön joining the class, the profile of the class, and the level of the competition, can only increase further.  The 5.5 Metre class is in a good place right now.