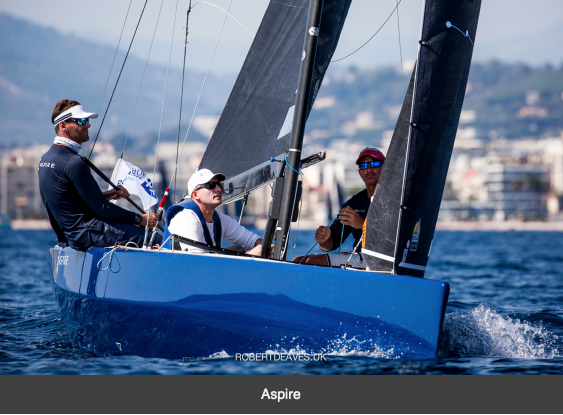 Throughout the 10 race series the Polish team barely put a foot wrong, but when they did, they managed to minimise losses and stay consistent, winning four races in the 14 boat fleet

Both Momo and New Moon had their chances but a few unforced errors and some bad strategic choices left them trailing Aspire, which was always ready to pounce and seemed incapable of making decisions that caused more them a momentary delay.

The final day brought very light winds and only one race sailed after a long delay onshore. Aspire led at every mark to confirm the regatta win in style. In fact the finishing order of the final race determined the top four with Momo in second while Ali Baba moved up to third. After choosing the wrong side on the first upwind New Moon II (BAH 24, Mark Holowesko, Peter Vlasov, Christoph Burger) was left trailing the leaders with too much work to do and could only finish fourth, dropping them out of the top three for the first time.

Kusznierewicz said, “I really enjoy regattas with various sailing conditions. In Cannes we sailed 10 races in 5, 8, 12 and 16 knots of wind. It was perfect weather.

“The starts were busy with good number of boats. Momo, Ali Baba and New Moon II are teams we had good rivalry with. Congratulations to all.

“We enjoy every day sailing together, though we still have a lot of issues, on the manoeuvres, on the ropes, on the settings. These boats require lots of time in these conditions and we are still learning how to do it, but it’s coming.

“I must also say it is super interesting that it is tight racing here. Some races there were six boats within 20 seconds at the finish and we can see that anyone at the top can win a race here.”

On Cannes, “It’s my first time here. We really counted on Stir Fry [bowman, Simon Fry]. He has sailed here 15 times, but this was the first for me. Not only does he know the race track but also all the best restaurants.”

“This win is important for us. We missed the Worlds this year so we set the goal for Regates Royales and Alpen Cup. We are happy with new sails from Doyle and the development we did with the Ali Baba team. We are glued together as a Team with Przemek and Simon Fry, who is one of the best sailors I’ve ever sailed with. We aspire to high goals and want to enjoy this beautiful 5.5 class of boats.”

The 5.5 Metre Category A circuit continues this coming weekend with the Herbstpreis on Lake Thun in Switzerland, before concluding at the rescheduled Alpen Cup at Torbole on Lake Garda, Italy from 21-23 October where a very strong fleet is expected.