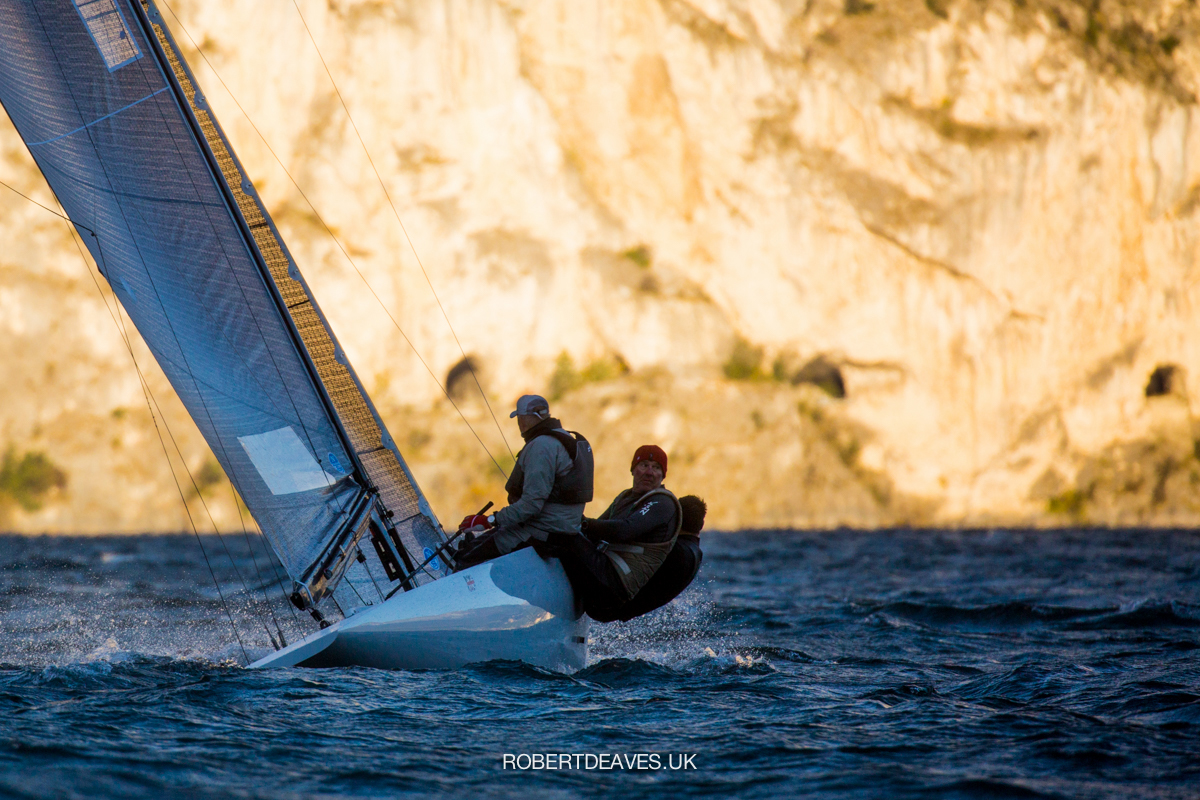 The final day started early in the half light before the sun peeked over the Garda mountains, while the northerly wind just seemed to strengthen during the morning. Initially held on shore for an hour, the fleet was sent out in a bitterly cold 18-20 knots with some bigger gusts causing a few problems. There was plenty of action.

While Girls on Film kept their eyes on Momo and John B, Ali Baba (BAH 23, Craig Symonette, Flavio Marazzi, William Alloway) had the best of the very shifty first beat to round ahead and lead all the way to take the win, while Girls on Film followed in a comfortable second, which as it turned out, was enough to take the series win.

After the race finished, the fleet was sent ashore with not too many complaints.

Morton explained the day, “We’ve had fantastic Garda breezes every day. This morning was quite cold and dark when we first started in the northerly breeze. We just needed to make sure that we tucked up John B and Momo, so we covered them on the first beat and ended up second which was good enough to tie up the series.”

On the decision to only run one race, “The wind was getting close to the class limit. The forecast we got was that when the sun came up the northerly would actually increase. By the end it was pretty close to it, and I think they’ve got plenty on here today with other events so they probably needed to get us tucked away. We were quite happy.”

There has been a lot of talk about Morton’s new boat. He says it is not too dissimilar to the current fleet, but the second boat that he has been building, due to be launched in a few weeks, is a different story.

“GBR 41 is the first of the new boats. We tested it against our old boat (a 2003 Wilke from Switzerland), which we knew was reasonably competitive, so we were quite confident and this weekend has proved it’s a pretty good all round boat. I have to say that all the VPPs and CFDs we did indicated it would be better in a breeze. We’ve yet to race against the Swiss boats in really light winds and that may be different, but certainly we were very comfortable here upwind and downwind.”

“GBR 42 is something quite different again. That should be ready in about 4-5 weeks and then we’ll do some testing in the Solent. It’s quite different, a David Hollom design, and you know with David he has some definitive ideas. Certainly all the testing we did, and the VPPs we did, indicate the boat will be stronger in a breeze over 10 knots, but it is quite different to all the other boats. So who knows? We’ll be in the penthouse or the outhouse I suspect.”

The prizes were presented by Giorgia della Valle, CVT’s own ILCA 6 U21 World Champion. Girls on Film not only won the Alpen Cup again, but also the Trofeo Franco Santoni, first presented in 2018 to remember the 5.5 Metre sailor and former President of Cicolo Vela Torbole.

After a few years of disrupted schedules, the hope is that the 2022 season for the 5.5 Metre class will be back to normal. 2022 is shaping up to be another exciting year with the World Championship and Scandinavian Gold Cup heading to Hankø in Norway, and a good range of Category 1 regattas across Europe. It will all start where the 2021 ended, with the Alpen Cup at CVT back in its normal slot in April.