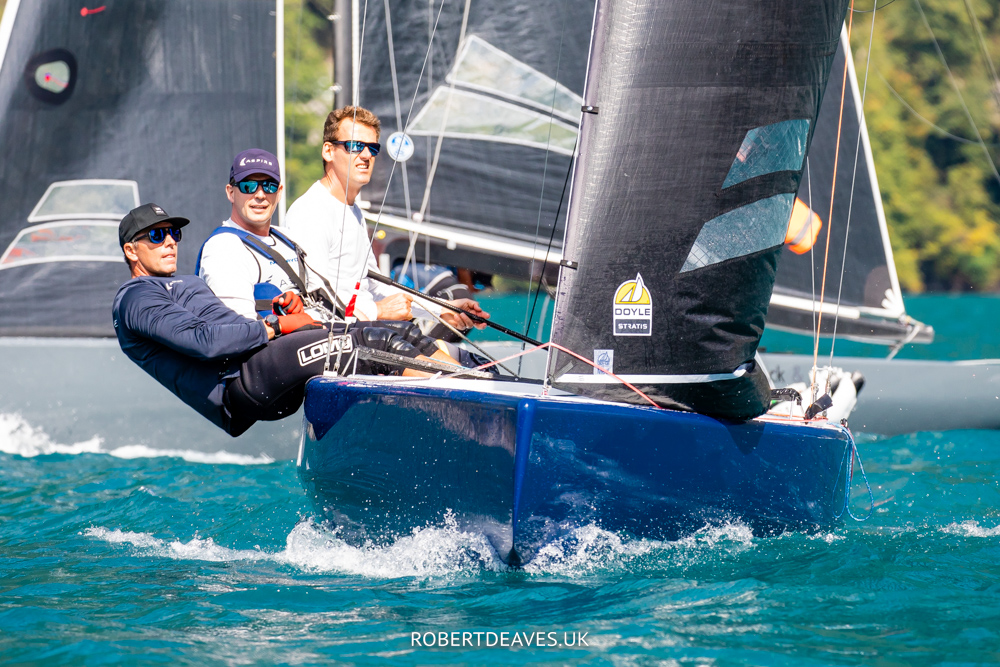 For the second day in a row, the fleet of 16 boats from six countries were treated to tropical blue water sailing conditions. The ridiculous beauty of Lake Lucerne was intensified by the fabulous hot and sunny weather, though that is forecast to disappear for the rest of the week, with the second regatta starting Thursday.

The results may indicate a domination by Aspire, but the racing was incredibly close at times with just a few boat lengths separating many at the finish. On Wednesday, Ali Baba made the best of the conditions. The racing took place in the western arm of the lake, and they took the lead on the second upwind of Race 5 to take their first win of the series, and followed that up with another win in the final race. However, a second place from Aspire in the opening race was enough to secure them the series. The crew of New Moon III were gradually getting to grips with the new boat and moved up to take third overall after a solid day. All told it was another hot day on the water with equally hot and close competition.

Mateusz Kusznierewicz commented, “Everyone was saying so many good things about Brunnen and the sailing conditions we had here proved that. We have had two separate race courses. Yesterday we were more to the south and today more to the west and it makes it very interesting. I am very happy to have six races and we are privileged to win this regatta and be Swiss champions.

“For Team Aspire I am very proud for Przemek and Ed; they did a great job. We enjoyed it very much. It was a good fleet and also happy that today we had good competition and Ali Baba won two races. Flavio positioned the boat very well around the race course and I think this is the reason they won. Impressive.

“We will be back here. We like this place. It’s a beautiful place.”

Susanne Struth, from Essen, in Germany is helming the only all-female team in the fleet, GER 120 (Susanne Struth, Juliane Hagen, Lisa-Catherine Eichhorn) and turned up with a boat they only bought last week, so it has been something of a learning experience.

“Our first boat, Paula, was unfortunately hit by lightning one week before the Easter Regatta in Thun so for the German Open we were happy to have a boat loaned to us and now we bought this boat one week ago, also from Thun.”

GER 120 is the former SUI 199, a Sebastien Schmidt design built by Steinmayer Bootswerft in 1996 and formerly a Bruno Marazzi Ali Baba.

“Right now we are trying it out and we are pretty happy with it because it has a good performance but we still trying to find out all the features and the trim settings. We are very lucky to have such a boat and starting a new chapter in our sailing.

“We also have a new crew here this week, so we are sailing together for the first time, but it is working well considering the circumstances. We are happy for every minute we can be on this fantastic lake and just enjoying sailing.”

On the racing, “It’s up and down for us. The spinnaker manoeuvres are getting better and better, but today was not so good. It’s all new, but yesterday the second race was pretty good for us and I think we can move forward with that.”

With the 5.5 Metre Swiss Open now completed, the Rigi Cup is scheduled to take place over Thursday and Friday. The forecast is somewhat wet.